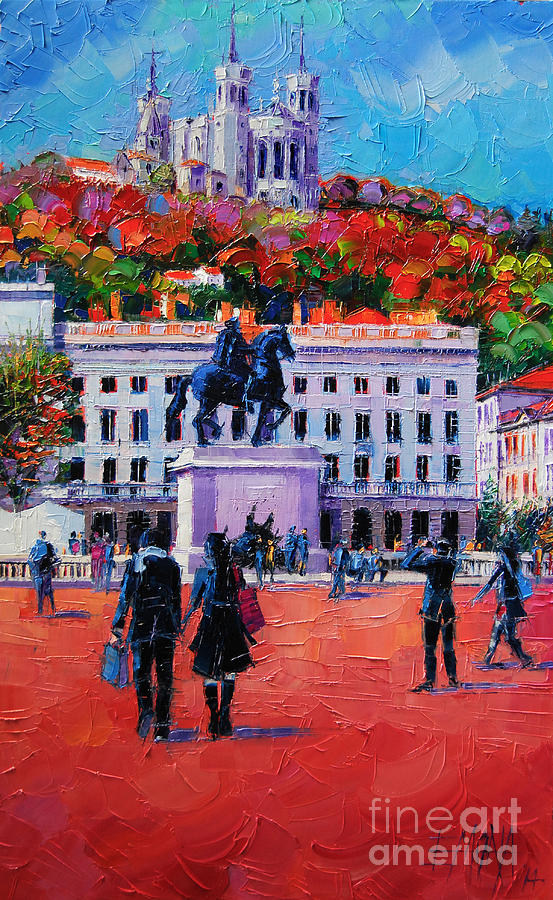 Place Bellecour is a large square in the center of Lyon, France. Measuring 312 m by 200 m (62,000 m2 or 15 acres), it is one of the largest open square in Europe, and the third biggest square in France, behind the Place des Quinconces in Bordeaux (126,000 m2) and the Place de la Concorde in Paris (86,400 m2). It is also the largest pedestrian square in Europe: vehicles are allowed in Places de la Concorde and des Quinconces.
In the middle is an equestrian statue of king Louis XIV by Francois-Frederic Lemot (1825). Another statue, representing the Petit Prince and Antoine de Saint-Exupery, is at the west end of the square. The square also has two pavilions, housing the tourist information office of Lyon and an art gallery.
The square is part of a UNESCO World Heritage Site.

Mona, congratulations on your sale of this wonderful painting!

THANK YOU to the buyer from Charlotte, NC - United States for purchasing a print of my oil painting UN DIMANCHE A BELLECOUR! I hope you will enjoy it for many years to come!

THANK YOU to the buyer from London, - United Kingdom!!! I hope you will enjoy your beautiful print of "Un Dimanche a Bellecour" for many years to come!

Congratulations on your sale!

Congratulations on you sale!

Many thanks to the buyer from Wilton Manors, FL - United States who purchased a print of my oil painting "Un Dimanche a Bellecour"!

Congrats on your recent sale!!

Thank you so much Scott!

Thank you so much Magdalena!

Hello Mona :-) I love this painting, its rich depth and beautiful balance is totally captivating :-) Lf

Speaking of famous statues painted, cher Mona, this one you did of the 'Sun King' in Lyon's Place Bellecour really shines--especially that animated young couple in the foreground--whose purposeful stride takes our eye right up to the hilltop cathedral's spires!

Thank you so much Joseph for your lovely comment! :)

Stunning and captivating with high color, architectural mass and the people to give it scale. I love the spatial division and the well-defined foreground, middle ground, and background. F/v!

Thank you very much Lynda!

Love this vertical composition as well Mona! Love the depth and energy--Beautifully done, as always! f/v

Thank you very much Bill!

City life are mainly much more grey and cold color dear Mona..But this great painting of art work is so warm and takes you into the life like came and live here..Even the blue become so warm and powerful.. I like your style like you are every where with every subject can be paint and draw..Very brave and very talented..

Thank you so much for your lovely comment, Cevdet!

Congratulations on this marvellous painting being FEATURED in “PAINTING THE OLD WAY” , L….group administrator, John Malone (You may also want to participate in our discussion thread, I would appreciate that)

Thank you so much for the feature, John.

Had to give this fantastic work a revisit and a like!! Would love to feature it in our group!

Thank you so much John.

Thank you very much Robyn!

Thank you very much, John!