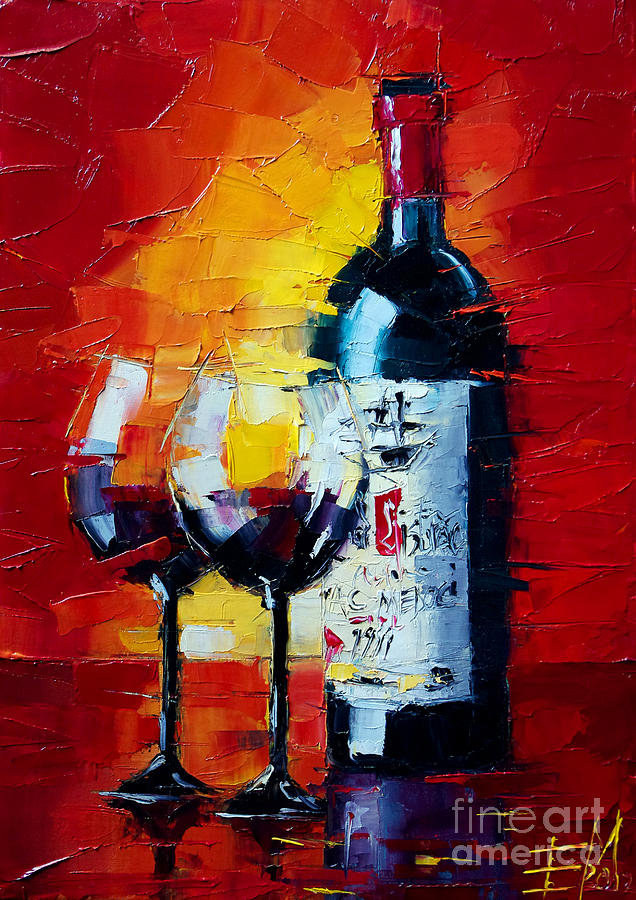 THE ORIGINAL PALETTE KNIFE OIL PAINTING ON CANVAS/ 18x13 inches HAS BEEN SOLD. PRINTS AND CARDS ARE AVAILABLE FOR SALE.

This is an impressionist modern painting representing a bottle of Listrac-Medoc red wine.
*****
Listrac-Medoc is a red wine appellation of theHaut-Medoc district of Bordeaux. It takes its name from the parish of Listrac-Medoc, where grapes using the title must be grown. Listrac-Medoc wines are known for being dry and austere when young, but Merlot is increasingly be used to boost their softness and approachability.
*****
France is the largest wine producer in the world. French wine traces its history to the 6th century BC, with many of France's regions dating their wine-making history to Roman times. The wines produced range from expensive high-end wines sold internationally to more modest wines usually only seen within France.
Two concepts central to higher end French wines are the notion of "terroir", which links the style of the wines to the specific locations where the grapes are grown and the wine is made, and the Appellation d'Origine Controle (AOC) system. Appellation rules closely define which grape varieties and winemaking practices are approved for classification in each of France's several hundred geographically defined appellations, which can cover entire regions, individual villages or even specific vineyards.
France is the source of many grape varieties (Cabernet Sauvignon, Chardonnay, Pinot noir, Sauvignon blanc, Syrah) that are now planted throughout the world, as well as wine-making practices and styles of wine that have been adopted in other producing countries.
(source:wikipedia)

One of your peers nominated this image in the 1000 views Groups nominated images by your fellow artist in the Special Features #11 promotion discussion. Please visit and pass on the love to another artist.

Beautiful work, my dear Mona! I am proposing this image for a special feature in the 1000 Views on 1 image group! Also l/f :)

Congratulations on your outstanding artwork! It has been chosen to be FEATURED in the group “500 VIEWS.”

Thank you very much to the buyer from Blue Bell, PA - United States for your purchase of a 16.875" x 24.000" framed print featuring my "Conviviality" painting!

Love your expressive merging of lines between objects (wine bottle, glasses) and your vibrancy and directional wave of color, Mona! like/fav! :)

Thank you Everyone for your Kind congrats on my recent sale! :)

Many thanks to the buyer from Walnut Creek, CA - United States!

Congratulations on your sale!

Oh, how I love this painting, so very beautiful.

This has to be one of my favorite works, so lovely!

Congrats on your sale!