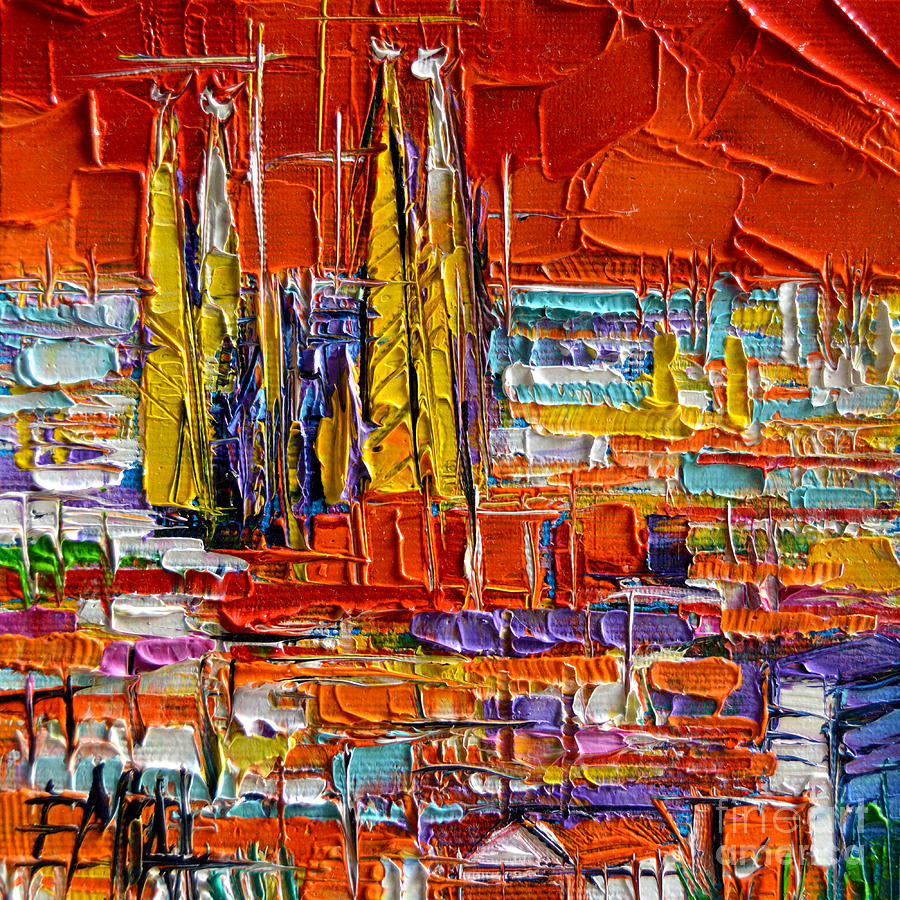 "Barcelona view from Parc Guell" by Mona Edulesco.
Textural impressionist palette knife oil painting realized on a very small format - 13x13 cm (5x5 in). The inspiration for this work came to me after visiting Barcelona this summer. Parc Guell is one of my favorite places in this awesome city... perhaps because of the impressive panorama overlooking the city from there. A truly magnificent place.

I have always loved to approach my urban paintings in a myriad of ways. I enjoy stylizing architectural forms in various manners. This has always been one of my goals, even a preoccupation from the time I was studying at the school of architecture until the present. The versatility of oil paint along with my prototypic work with palette knives allows me to play with the urban forms abstracting the city in an unconstrained manner.

Describing Sagrada Familia, art critic Rainer Zerbst said, "It is probably impossible to find a church building anything like it in the entire history of art" and Paul Goldberger called it, "The most extraordinary personal interpretation of Gothic architecture since the Middle Ages."

The Basilica i Temple Expiatori de la Sagrada Familia (Basilica and Expiatory Church of the Holy Family) is a large Roman Catholic church in Barcelona, Catalonia (Spain), designed by Catalan architect Antoni Gaudi (1852-1926). Although incomplete, the church is a UNESCO World Heritage Site and in November 2010 Pope Benedict XVI consecrated and proclaimed it a minor basilica, as distinct from a cathedral, which must be the seat of a bishop.
Construction of Sagrada Familia had commenced in 1882 and Gaudi became involved in 1883, taking over the project and transforming it with his architectural and engineering style, combining Gothic and curvilinear Art Nouveau forms. Gaudi devoted his last years to the project, and at the time of his death at age 73 in 1926, less than a quarter of the project was complete. Sagrada Familia's construction progressed slowly, as it relied on private donations and was interrupted by the Spanish Civil War, only to resume intermittent progress in the 1950s. Construction passed the midpoint in 2010 with some of the project's greatest challenges remaining and an anticipated completion date of 2026, the centenary of Gaudi's death. (source: Wikipedia)

THANK YOU very much to the buyer from Sawbridgeworth, England - United Kingdom for purchasing a beautiful framed print of my oil painting BARCELONA SAGRADA FAMILIA VIEW FROM PARC GUELL! I hope you will enjoy it for many years to come!

Wonderful artwork! Congrats on the sale!

Congratulations on your recent sale!

Beautiful work as usual Mona. Love the composition balance and how the yellow compliments the red.

THANK YOU very much to the buyer from Northern Ireland - United Kingdom for purchasing a print of my oil painting BARCELONA SAGRADA FAMILIA VIEW FROM PARC GUELL! I hope you will enjoy it for many years to come!

Congratulations on your sale Mona!

Art is unquestionably one of the purest and highest elements in human happiness. It trains the mind through the eye, and the eye through the mind. As the sun colours flowers, so does art colour life. -- Congratulations on your recent sale of an amazing work

THANK YOU to the buyer from Miami, FL - United States for purchasing a 40" metal print of my BARCELONA painting! I hope you will enjoy it for many years to come!

THANK YOU to the buyer from Portland, OR - United States for purchasing a nicely framed print of my Barcelona oil painting! I hope you will enjoy it for many years to come!

Congratulations on your latest sale Mona! :)

One of your peers nominated this image in the 1000 views Groups nominated images by your fellow artist in the Special Features #13 promotion discussion. Please visit and pass on the love to another artist.....L/F/Tw

Mona! Congratulations on this successful sale of beautiful artwork!

Congratulations on your sale.

Thank you to the buyer from Gardendale, AL for purchasing a large canvas print of "Barcelona Sagrada Familia view from Park Guell"!

Love the Sagrada Familia and this fresh new way of rendering it. Well done!

Well done, congratulation on your sale!