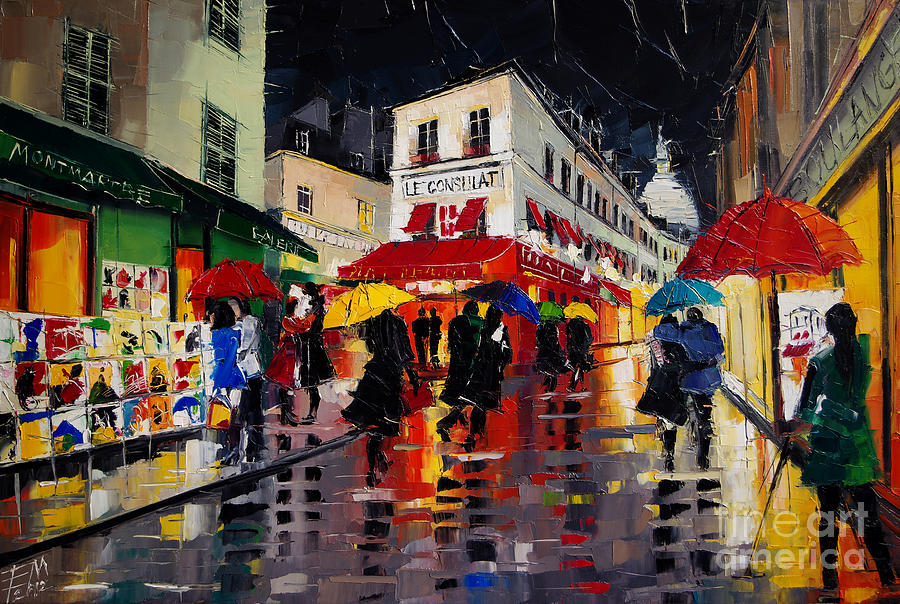 THE ORIGINAL PAINTING HAS BEEN SOLD TO AN ART COLLECTOR FROM UK. PRINTS AND CARDS ARE NOW AVAILABLE FOR SALE.
Original palette knife oil painting on deep edge canvas / 24x35x1,4 inches
This is a painting representing one of the most famous cafe in Montmartre, Paris called Le Consulat, in a rainy evening. In the background you can see the Sacre Coeur. This is a wonderfully colourful place in the heart of the artists quarter in Paris. I realized this oil painting using only a palette knife. This is part of a series of paintings from Paris.

Montmartre is a hill in the north of Paris, France. It is 130 metres high and gives its name to the surrounding district, in the 18th arrondissement, a part of the Right Bank. Montmartre is primarily known for the white-domed Basilica of the Sacre Coeur on its summit and as a nightclub district. The other, older, church on the hill is Saint Pierre de Montmartre, which claims to be the location at which the Jesuit order of priests was founded. Many artists had studios or worked around the community of Montmartre such as Salvador Dali, Amedeo Modigliani, Claude Monet, Piet Mondrian, Pablo Picasso and Vincent van Gogh. Montmartre is also the setting for several hit films.

Paris is the capital of France and the country`s largest city. It is situated on the river Seine, in northern France, at the heart of the Ile-de-France region. The City of Paris, within its limits largely unchanged since 1860 is today one of the world`s leading business and cultural centres, and its influence in politics, education, entertainment, media, fashion, science and the arts all contribute to its status as one of the world`s major global cities. Paris is one of the most popular tourist destinations in the world, with over 30 million foreign visitors per year. There are numerous iconic landmarks among its many attractions, along with world-famous institutions and popular parks.
Paris is a city to discover, seeing the sights, visiting the museums, they're part of the experience. But then jump on the metro or a bus and get off at a place you've never heard of, wander through a quartier where French mixes with Arabic or Vietnamese, have lunch in a local restaurant, poke your head into mysterious shops, or just perch on a cafe terrace with a vin blanc and let yourself fall in love with the city.
Sources: Wikipedia, bestcitiestravel.com

THANK YOU very much to the buyer from Bingham, Nottinghamshire - United Kingdom for purchasing a print of my oil painting THE UMBRELLAS OF MONTMARTRE! I hope you will enjoy it for many years to come!

Congratulations on your sale!.....Carry On!

THANK YOU everyone so much for your beautiful and thoughtful comments. Thank you to all who have featured my painting in their wonderful groups, too! I appreciate a lot!

Congrats on your sale of this gorgeous work of heART, Mona! Fave

Congratulations, Mona, for the well deserved choice for the 'Up Close & Personal' artist in "A Woman's Touch!" I just LOVE your artwork! LF Sending love and hugs, Janet 💕

Magnificent artwork, Mona! Congratulations on your Up Close and Personal Feature! F/L.

Wonderful artwork!! Congrats on your Up Close and Personal Feature!! T/P

Mona, congrats on being the Featured Artist in Woman's Touch. Congrats on receiving 7,877 views on this image. f/l

Congrats on being the Featured Artist in the A woman's Touch group. Very deserving.

I especially love those reflections! l/f

Congratulations on 'UP CLOSE and PERSONAL' in Woman's Touch Group. Great piece :)

This is a fabulous painting of Paris in the rain! Beautiful feature for the week in the Woman's Touch group. l/f

THANK YOU to the buyer from Glendale, CA - United States for purchasing a pack of 10 greeting cards of this artwork of mine!!!

SOLD a Face Mask - One Size Fits All of THE UMBRELLAS OF MONTMARTRE - Paris impressionism palette knife cityscape. THANK YOU to a buyer from Philadelphia, PA - United States!

THANK YOU to the buyer from Paddys Green, Queensland - Australia!!! I hope you will enjoy your beautiful print of " THE UMBRELLAS OF MONTMARTRE" for many years to come!