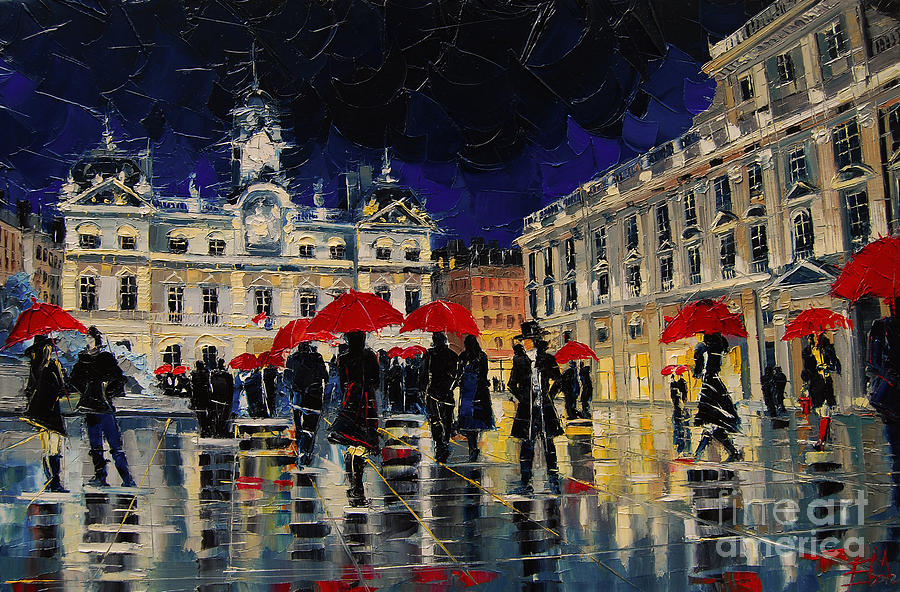 The Rendezvous Of Terreaux Square In Lyon

The Rendezvous Of Terreaux Square In Lyon

This is an impressionist modern painting representing one of the most famous public square in Lyon, called The Place des Terreaux, in a rainy evening. I realized this oil painting using only a palette knife. This is part of a series of paintings from Lyon.

The Place des Terreaux is a square located in the centre of Lyon, France and it belongs to the zone classified as World Heritage Site by UNESCO. Place des Terreaux is limited in the south by the Museum of Fine Arts, in the east by the Town Hall. This place is very busy with tourists, with its beautiful fountains, and its many gastronomy places.
The Place des Terreaux is symbolic of the city's heritage. It takes its name from the muddy ground crossed by large ditches which occupied the square in Roman times. Located in the first district of Lyon, Place des Terreaux was originally a vast field of mud. In the Middle Ages, the walls were built between the River Saone and Rhone, by Lyon's merchants.
At the center of the square, the municipal officials inaugurated on 22 September 1891 an allegorical fountain of Saone. It was built by Frederic Auguste Bartholdi in the nineteenth century. He is an architect of great renown who is particularly famous in the world to have carved the Statue of Liberty, or the monument of Christopher Columbus.
In the site there are lots of restaurants, bistros and bars, to restore and refresh themselves in a friendly, family or friends after visiting the site. These places are also ideal to meet and get acquainted with Lyonnais. Certain people advise you to cross diagonally this famous square to avoid evil spells and bad luck!

Your rainy night scenes are my favorite of all your works, Mona. Watery reflections set such a wonderful mood and people making the best of their evening, umbrellas just part of their attire as they celibrate night life. Wonderful sentiments here....fav/like

Absolutely outstanding....all of your work is just amazing L/F

Thank you very much, Henryk! :)

Thanks so much Shylaja!

It looks so magical and dreamy! Fav

Revisiting your wonderful work I love and Shared on Pinterest :) . I invite you to submit this piece (and only) to my group "OEAC - Outstanding Excellence Aimelle Collection". I am very selective and it would be an honor to see your outstanding artwork among my most FAA favorites :) ... the group is HERE --> http://fineartamerica.com/groups/oeac--outstanding-excellence-aimelle-collection-.html?tab=overview . thank you!

Thank you so much, Aimelle. :)

Thank you very much Anne.

Thank you so much Wayne!

This image totally draws me in.. wonderful.

OOOPS...sorry that was suppose to be a SECOND PLACE WIN!!! CONGRATULATIONS!!!

Thank you very much Karen for your kind congrats on my second place win in the "TOP 5 SELLERS on FAA" contest! :)

Thank you so much for your beautiful comment, Sherri! :)

I so love your street scenes, I have always a big smile when I look at these ..the movement ot the people and the sidewalk is just so magnificent...I love love love it...wonderful!! Mona Sherri FVL

Thank you so much Joseph!

What a beautiful painting EMONA! Love the colors, contrasts & design! So fantastic! v/f

Genevieve, thanks so much!

Thank you very much Ferid!

Thank you very much Lin Hai!