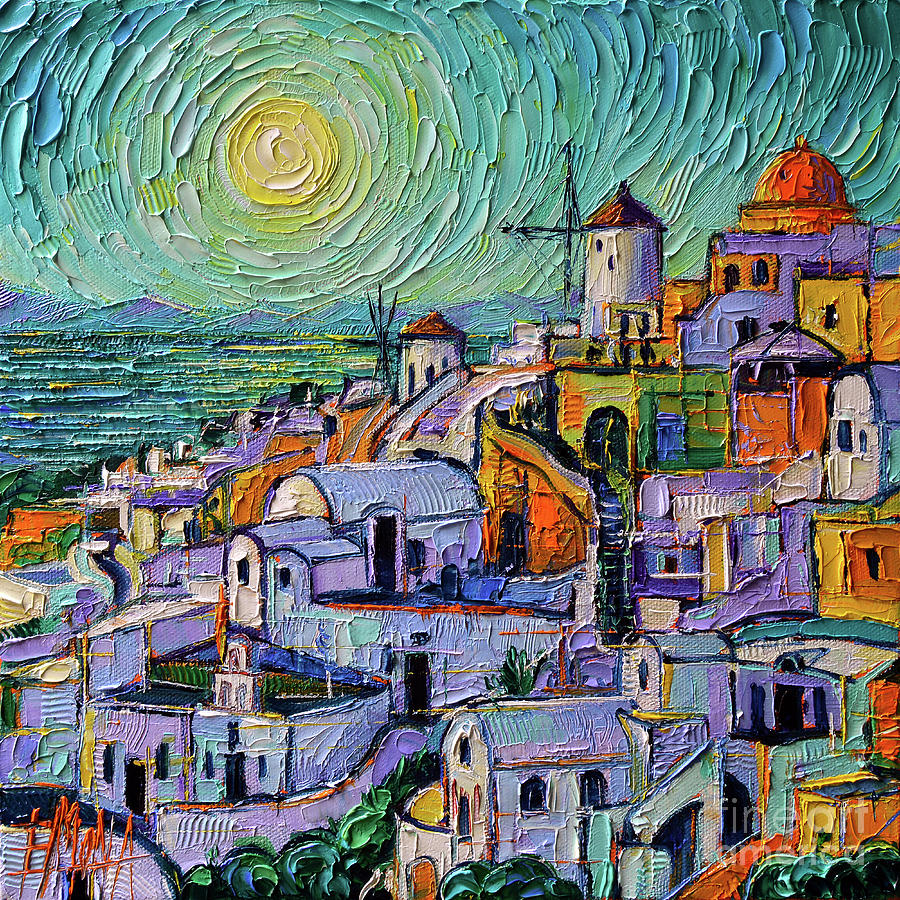 SANTORINI MAGIC by Mona Edulesco.
Textured impressionism commissioned palette knife oil painting on gallery wrapped canvas (3D canvas) 30x30x4,5 cm (12x12x1,7 inches).
------------------------
Oia or Ia is a small village and former community in the South Aegean on the islands of Thira (Santorini) and Therasia, in the Cyclades, Greece. It covers the whole island of Therasia and the northwesternmost part of Santorini, which it shares with the municipal unit of Santorini. It is built on the steep slope of the caldera and the houses and restaurants are built into niches carved into the caldera on the seaward side. There are narrow passageways and a central square. The sunlight hours in this village are much longer than in the Fira town. Its paths are very narrow and hence gets congested during the tourist season. The idyllic surroundings of the town have a complex of white washed blue domed churches and charming, traditional Cycladic houses and cave houses that are carved into the rock face on top of the cliff. It is set in a location which provides excellent views of the sunset over the caldera.
Oia typifies the white-painted houses of the Cyclades, in many cases built directly into niches which are cave houses used by crew of the ships, on the lip of the volcanic crater, between which are narrow alleys and blue-roofed churches with cupolas. The wealthy ship captains of the late 19th century built neo-classical mansions. These houses are seen built in succession one above the other. (source: wikipedia)

CONGRATULATIONS!!! You are the 2nd Prize with a tie in the Contest - "PAINTINGS BY WOMEN PAINTERS - JUNE" sponsoring by the Group Women Painters - Hand paintings only. Great image, wonderful colors, very well done! F

Lovely work! Congrats on your feature in NO PLACE LIKE HOME :~)

BRAVO! Your artwork has earned a FEATURE on the homepage of the FAA Artist Group No Place Like Home, 4/23/2022! You may also post it in the Group's Features discussion thread and any other thread that fits! l/f

Congratulations your outstanding artwork has been featured on the leading page of Impressionism group 4/13/2022! Please visit the group to view it in our online gallery and to add it to the many themed catalogs in the group’s discussions. Excellent work!

Congratulations on your feature, Mona! I love this beautifully textured painting, and your excellent palette knife work! L/F

Congratulations!! Your artwork is my today feature and favorite on Women Painters group. Shared on our FAA group homepage and on Facebook group.

Beautiful Mona the colours and textures are so perfect fl

I love the scene and love the colors and your technique! Beautiful work!!!

CONGRATULATIONS! .... and thank you for with us your wonderful work of art that been proudly presented on the Home Page of the group, 'ART FOR PASSION - PASSION FOR ART'. If you wish, you may archive it permanently or promote it further in the Discussions Tabs Featured .... Nancy Carol

Congratulations! Your skillful and interesting painting has been FEATURED on our Homepage, Painting the Old Way.

What a happy painting! f/l/tw

Delightful work Mona. Such an understanding of form and color variation.

Congratulations, your work is featured on the homepage of "Created by my Hands"

This is stunning. Love the textures and colors