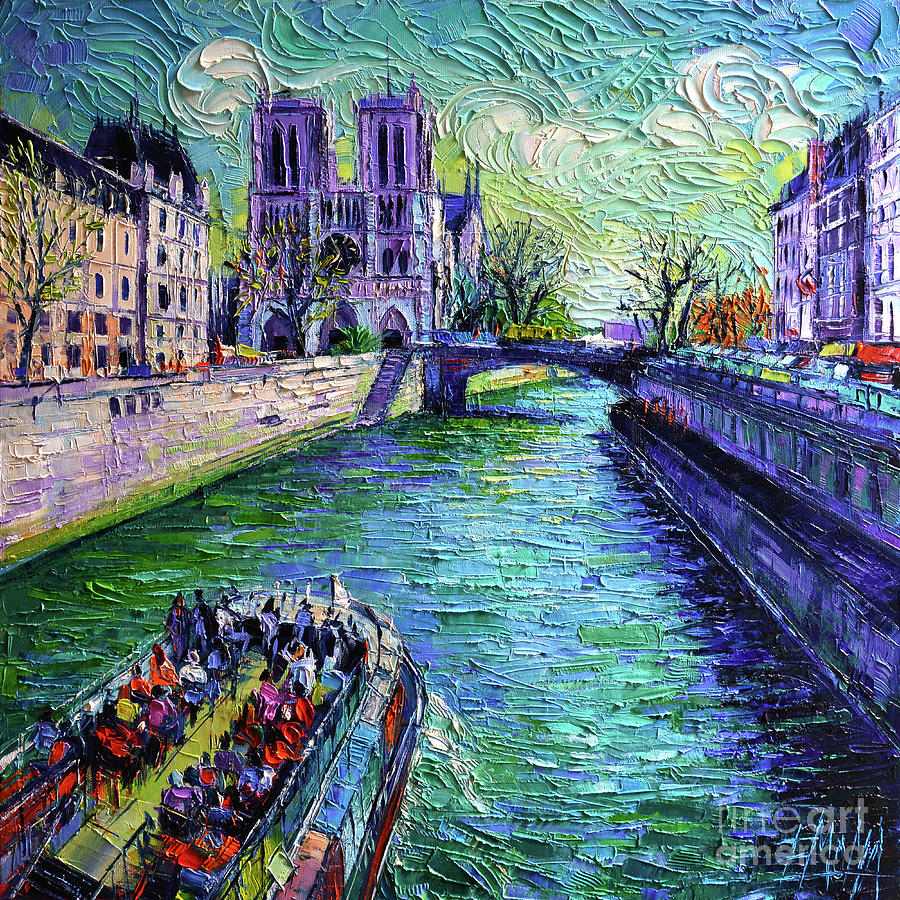 Original palette knife oil painting on canvas / 50 x 50 (20 x 20 inches) / January 2017. Contemporary impressionist landscape oil painting who captures Notre-Dame de Paris and a Bateaux-Mouches boat on the Seine river, view from the Pont Saint-Michel. I was inspired to paint this scene while I was strolling on the streets of Paris on a wonderful spring day...

Notre-Dame de Paris (meaning "Our Lady of Paris"), also known as Notre-Dame Cathedral or simply Notre-Dame, is a medieval Catholic cathedral on the Ile de la Cite in the fourth arrondissement of Paris, France. The cathedral is widely considered to be one of the finest examples of French Gothic architecture, and is among the largest and most well-known church buildings in the world. The naturalism of its sculptures and stained glass are in contrast with earlier Romanesque architecture.

Paris is the capital of France and the country`s largest city. It is situated on the river Seine, in northern France, at the heart of the Ile-de-France region. The City of Paris, within its limits largely unchanged since 1860 is today one of the world`s leading business and cultural centres, and its influence in politics, education, entertainment, media, fashion, science and the arts all contribute to its status as one of the world`s major global cities. Paris is one of the most popular tourist destinations in the world, with over 30 million foreign visitors per year. There are numerous iconic landmarks among its many attractions, along with world-famous institutions and popular parks.

Paris is a city to discover, seeing the sights, visiting the museums, they're part of the experience. But then jump on the metro or a bus and get off at a place you've never heard of, wander through a quartier where French mixes with Arabic or Vietnamese, have lunch in a local restaurant, poke your head into mysterious shops, or just perch on a cafe terrace with a vin blanc and let yourself fall in love with the city.

Congratulations on your recent sale, Mona!

Love it, congratulations on recent sale.

Congratulations on your most recent and beautiful sale.

THANK YOU very much to the buyer from Champaign, IL - United States for purchasing a canvas print of my palette knife oil painting I LOVE PARIS IN THE SPRINGTIME - NOTRE DAME DE PARIS AND LA SEINE! I hope you will enjoy it for many years to come!

SOLD a Face Mask - One Size Fits All of "I Love Paris in the Springtime - Notre Dame de Paris and La Seine". THANK YOU to a buyer from Bradenton, FL - United States!

Congratulations on your sale! F

Congratulations!! This beautiful image has been selected to be featured for the week in the “Shadow Silhouettes and Reflections Outdoors” Group Home Page. You are welcome to add a preview of this featured image to the group’s discussion post titled “2019 June: Stunning Group Featured Images and Thank-you’s” for a permanent display within the group, to share this achievement with others. You are also welcome to share your featured image on our new Facebook page: https://www.facebook.com/groups/247552766180931/ Thank you for your participation in the group! (June 2, 2019)

Congratulations on your feature in the Soul of an Artist

SOLD a IPhone 8 Case of I Love Paris In The Springtime - Notre Dame De Paris And La Seine. Thank you to the buyer from Lawrenceville, GA - United States.

CONGRATULATIONS!! Your beautiful artwork has been Featured by the - CATHOLIC ART GALLERY - Artist Group on Fine Art America / PIXELS! Thank you for sharing it !! http://tinyurl.com/CatholicArtGallery

Very beautiful, and I love Paris too!

One of my fav spots in Paris, Mona - you evoke it wonderfully! :) l/f!

Thank you very much to the buyer from Aurora, CO - United States for purchasing a print of my painting "I Love Paris In The Springtime"! :)

Congratulations on your recent Sale!!