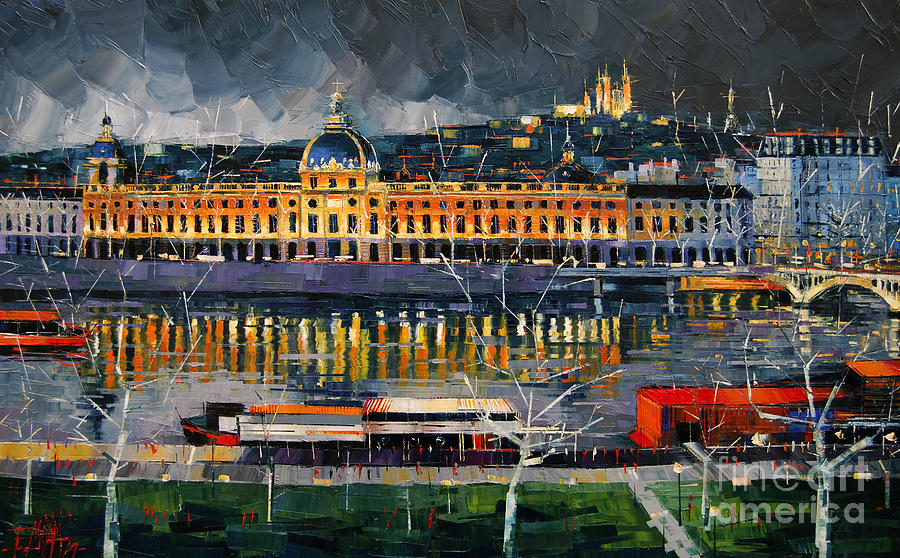 This is a work commissioned by an art collector from Lyon who wanted me to paint him the view from his window.

This is a modern contemporary impressionist painting representing one of the most beautiful and most important monuments in Lyon. This is part of a series of paintings from Lyon.

Hotel-Dieu de Lyon was a hospital of historical significance situated on the west bank of the Rhone river, on the "Presque-isle" (the Peninsula between the Saone and Rhone rivers which run through the city center). It has been out of use since 2010. First erected in medieval times, the building originally served as the "Confrerie des freres pontifes" (est. 1184), a pontifical meeting-place and refuge for both traveling and local members of the clergy. However, when the first doctor Maitre Martin Conras was hired in 1454, 'Hotel-Dieu' became a fully functional hospital, one of the most important in France. As Lyon was a city known for its trade and seasonal fairs, many of the early patients were weary travelers of foreign descent.
In 1532, 'Hotel-Dieu' appointed former Franciscan/Benedictine monk-turned-doctor and great Humanist Francois Rabelais, who would write his Gargantua and Pantagruel during his tenure here. Renaissance poetess Louise Labe lived just beyond the western limits of the building.
Massive expansion projects in the 17th century by Ducellet (under Louis XIII and Richelieu) and in the 18th century by Soufflot (under Louis XIV and Colbert) replaced the original building with the grandiose wings and courts we know today. In fact, at its greatest point, the hospital extended from its present position beyond Bellecour to engulf the area now occupied by the central post office. (source: Wikipedia)

Congratulations on your sale.

THANK YOU to the buyer from St. Louis, MO - United States for purchasing a Tapestry (50" x 61") of my palette knife oil painting "Before The Storm - View On Hotel Dieu Lyon And The Rhone France"! I hope you will enjoy it!

A tremendous work of art, Mona! Everything about this is truly stunning! l/f

Congratulations! Your beautiful artwork has been featured on the homepage of "Travel Art" group at Fine Art America :) Please archive it in the specific travel category under discussions: https://fineartamerica.com/groups/1-travel-art.html?showmessage=true&messageid=3652847 and don't forget to promote it in our Pinterest group board and/or our Facebook group;)

Congratulations! Your art is featured on the front page of art group "COMMISSIONED WORK"

Mona, this is a monumental work of art that brings joy to one's soul! Your gallery is so full of beauty that one doesn't know where to look first. Thanks for sharing your creativity and joyous use of color!

Thank you very much, Darrell!

This is a lovely view capture before the storm.

Thank you very much Jake.

Menega, thank you very much for the feature in the OLD WORLD EUROPEAN CITIES group! :)

Thank you so much, Gabriella!

What a FANTASTIC and beautiful painting Mona !!!

Thank you so much, Jacqueline! :)

Thanks so much Guido!