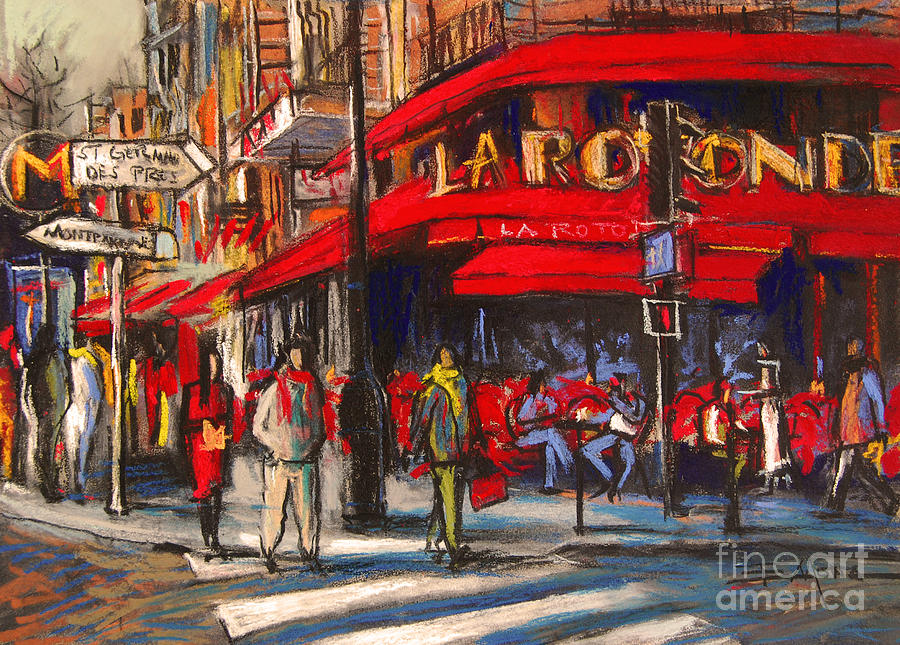 This original pastel is currently for sale.   At the present time, originals are not offered for sale through the Mona Edulesco - Website secure checkout system.   Please contact the artist directly to inquire about purchasing this original.

The Cafe de la Rotonde is a famous cafe in the Montparnasse Quarter of Paris, France. Located on the Carrefour Vavin, at the corner of Boulevard du Montparnasse and Boulevard Raspail, it was founded byVictor Libion in 1911. Along with Le Dome and La Coupole it was renowned as an intellectual gathering place for notable artists and writers during the interwar period.
Montparnasse is most noted as the spot where painters, sculptors, writers, poets and composers flocked: they arrived from many places including Europe, Russia, the Ukraine, the United States, Canada, Mexico, Japan, Central and South America. Creativity was clearly embraced and each time a new artist arrived they were welcomed, despite politics or religion. The list of individuals who congregated in Montparnasse has been a veritable who's who since the cafe opened its doors. Among the famous are Pablo Picasso, Ernest Hemingway, Man Ray, Max Ernst, Henri Rousseau, Henry Miller, Gertrude Stein, Samuel Beckett, Fernand Leger, Henri Matisse, Marc Chagall, Edgar Degas, Diego Rivera and Marcel Duchamp. One could say that this is where the art of meeting and interacting was born and refined.
(source: Wikipedia, http://www.bonjourparis.com)

THANK YOU to the buyer from Waxhaw, NC - United States for purchasing a throw pillow of this work! I hope you will enjoy it for many years to come!

Thanks a lot to a buyer from Miami, FL - United States who purchased a print of "La Rotonde"!

Congrats on your sale!

Congratulations on your Sale Mona

Congratulations on your sale!!!!

Congratulations on your sale Mona!! :-)

Congratulations on your sale :)!

Wow Mona, Wow! I absolutely love the way that you paint, So Masterful..I have always wanted to go to France and study under someone special, any suggestions? Your Paintings are so Precious! I love them all!! l/f and following your work, your fan, Catalina

Such a great warm colors painting...Love it! and Pin it!

My thanks to the art collector from Spanaway, WA - United States for purchasing a beautiful framed print of my pastel painting entitled "At the Cafe de la Rotonde Paris"! Enjoy it!

Gorgeous artwork, Mona! Love the composition, vibrant colors and the feel of Paris!

Love all of your cityscapes especially this one! Fl

WOW, THIS IS GORGEOUS, NOW I WANT TO GO TO PARIS, MONA

Phyllis, thank you very much.